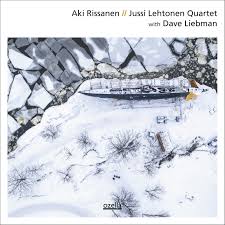 Biographical Connections is what I’d call a jazz love in. The mood, optimistic and rooted in some golden moments of the history of the genre – Dave Liebman playing with Lars Werner as far back as 1967 – is almost an excuse for the Jussi Lehtonen Quartet to let loose.

Scriabin, a homage to the Russian composer, immediately harnesses Liebman’s sax with long flowing lines, accentuated by Aki Rissanen’s driving piano, each a comfortable foil for the other, a demonstration of the quartet’s facility for period of cool grace between the outbursts.

And if Scriabin is frantic, Three A’s is the opposite, with the controlled passion of Jori Huhtala’s bass and Jussi Lehtonen’s percussive beat achieving what Lehtonen refers to as a counterpart between swinging and temperance: their’s is the primer for quite superb licks from Liebman, the maestro.

Recent recordings by poLO and the Kari Ikonen Trio have shown a predilection for a so called full on live approach in the studio, and the Aki Rissanen-Jussi Lehtonen Quartet, Ozella stable mates with their Finnish compatriots, the Kari Ikonen Trio, have repeated the feat.

The idea of course is to bring out a tight and flexible interplay between the musicians, but to do that you need the appropriate compositions, and Biographical Connections contains ten of them, including one of my favourites, the Lehtonen composition, Internal Affairs.

While you can sense a pervasive mood of Finnish melancholy in Scriabin and Internal Affairs, the exploration of the past, particularly Liebman’s link with Miles Davis in the wake of his Bitches Brew era, surfaces with elan on In the Corner, which opens like any number from Brubeck’s Time Out.

Rissanen revisits Billy Strayhorn’s Chelsea Bridge with the longest track, Pont Marie, and the overall feel of a lack of polish in the studio, and that’s a positive, abetted by slow simmering mid-tempo fantasies and experimental sonority effloresces in Gong