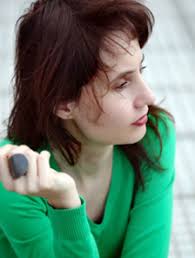 This is a novel of its time and before its time. Arguably, it is epic in its scope, a thorough introspective exploration of the conundrum that has become the European Union’s bete noire, Greece.

Of course, Greece always was and always will be multi-faceted. Its politics appears as riven and as complicated as the Northern Ireland Executive, as ridiculous as a circus.

To a novelist, however, the story of contemporary Greece, with its many and far reaching roots, is an invaluable and inexhaustible source of material: The Scapegoat, Nikolaidou’s fourth novel, spans the unsolved murder of an American journalist in 1948, and the economic anarchy of 2011.

A Greek journalist is convicted for the murder but when he is released over a decade later, he claims his confession was as a consequence of torture by the police. So what’s new there?

The murky story behind the events that result in the American floating in the bay off Thessalonika are revisited seventy years later by a disaffected high school student, who is given an assignment to get to the truth of the matter.

The Scapegoat is not a mystery novel, but rather a tapestry of many voices – the school kid, the murdered journalist’s wife, the mother of the convicted man, the chief of police who believes that brutal incarceration and interrogation are a necessity – which are idiosyncratic commentaries on mother Greece, draped in dark humour, with deep fissures behind the craquelure.

The reader is left with the feeling that in Greece, the more things change, the more they stay the same, though there is an element of truth in James Hillman’s summation that outsiders return to Greece to rediscover the archetypes of the mind.

Nikolaidou has the Senecan gift for imbuing her cast of characters with an original and authentic voice, especially the adolescent Minas, upon whose shoulders the weight of injustice and hypocrisy lie.

The author’s empathy about her country is perhaps best articulated by a lawyer who is troubled when Greece’s leaders ‘insist on blaming outside forces for the country’s woes rather than their own decisions. They refuse to acknowledge their own failures.’ Karen Emmerich’s translation doesn’t miss a beat.