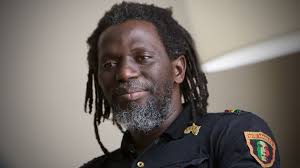 Universal injustice is never too far from the heart of Tiken Jah Fakoly, both as a song writer and an interpreter. On his last CD recorded a year ago, Dernier Appel, he wrote all ten songs, a reggae fuelled invocation to Africa to get its act together:

Not one to let the grass grow under his feet,  Fakoly is back with Racine, an eleven track homage to the perpetual legacy of reggae to both empower and to disenthral.

In the biography of  Fakoly, and specifically his development as a songwriter,  Racines is an invaluable document as it traces the seminal influences on somebody today whose appeal is almost, in musical terms, as messianic as his forerunner, Bob Marley.

As an exercise in measuring the impact upon the young Fakoly of Marley and indeed Peter Tosh, it is worth listening to Dernier Appel and Racines side by side. Although the comparisons in attitude and melody are naturally similar, Racines is stridently angrier.

Is It Because I’M Black and Slavery Days, offspring of a more vicious discord back in the day, are not in the least mellowed by  Fakoly, but it is the voice of a maturer interpreter.

On the other hand, we can see the eleven covers for what they are, sun bursts of impeccable song writing and music – One Step Forward, Get Up Stand Up – which helped bridged the socio-political chasm between Africa and Jamaica, resplendent in beat and rhythm.

Racines also places  Fakoly in the lineage of Marley and Tosh and Nuju Banton and Burning Spear, whom he first heard on his brother’s turntable in his village close to northern Cote d’Ivoire. Marley would have approved of  Fakoly’s selection and guest performers: U Roy, Max Romeo, Ken Boothe and Jah9.

Perversely, I first discovered Marley and Junior Murvin on my own brother’s turntable, courtesy of Stiff Little Fingers’ and The Clash’s brilliant punk arrangements of Johnny Was and Police And Thieves, proof of reggae’s malleability. Do yourself a favour and listen to both covers: Jake Burns has never sounded better