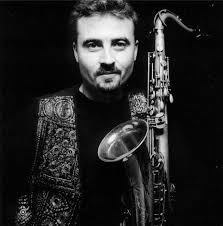 Return to the Fire

The fire in question is a reference to Enter The Fire, a seminal moment in the career of Tim Garland two decades earlier, after it was brought by Billy Childs to the attention of Chick Corea, from whom, by his own admission, this excellent saxophonist from northeast England, has learned more about band leading and jazz.

The big surprise about Return to the Fire is that it should mushroom so closely in time to last year’s double CD, Songs To the North Sky, 23 luminous tracks of breathtaking and epic undertaking by Garland, a homage to his adopted home in England, as if his compositions were interpolated by the spirits of Ted Hughes and Vaughan Williams.

Don Paterson memorably wrote that Garland had put together a succession of thrilling journeys across new terrain others might have decided was impassable.

With Enter The Fire, I was curious whether Garland’s lightning could strike twice, so effusive was I in admiration for the instantaneous radiant sprawl of Songs to the North Sky, as if one were listening to tenor and soprano sax for the first time.

The answer is an unqualified yes: opening with Abiding Love, featuring the irrepressible Jason Rebello on piano, Garland opens and closes the second longest tune on the six track recording, with warm and rapid coloratura passages, and there is no significant departure from an ambience that is calmly reflective in what follows.

It would seem that the motivation behind Return To the Fire, though no arm twisting was needed, was an attempt to capture the essence of Garland and his fellow musicians’ early jazz influences, encapsulated by JJ Johnson, Miles Davies and Wayne Shorter. Garland is reunited with the original  Enter the Fire band.

The beauty behind Johnson’s Lament here is the unforced interplay between Rebello, a survivor from Enter The Fire, and Garland, who shows in his dexterity with the ballad form, especially the embodiment of a romantic narrative, than in paying homage, there is more to interpretation than simply replicating a key influence.

The rapid and playful Return to the Fire is a solid bridge to Valse Pour Ravel which, depending on your ear, summons the compositional tempo of Ascenseur pour l’echafaud, with beautiful harmony between Garland’s lyricism and Gerard Presencer, a salon piece which shimmers until it diffuses like a vanishing smoke wreath. Return to The Fire is a recording you won’t stop listening to. There is about Garland the gift of wakeful attention to everything he does.