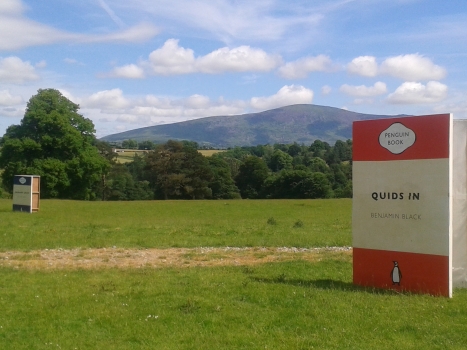 The Festival of Writing & Ideas, spread over four venues on the grounds of Borris House, was bookended this summer by the sold out performances of two stellar actors.

Orson Welles biographer and star of A Room With a View and Four Weddings and a Funeral, Simon Callow, read from Seamus Heaney’s posthumous Aeneid Book VI, after he was introduced by the late poet’s daughter, Catherine.

And  Dominic West, better known for his gritty role in iconic television series The Wire, interviewed the writer of The Killing Fields and Whitnail and I, Bruce Robinson.

The Festival of Writing & Ideas came to the attention of the world’s media last year when regular attendee David Gilmour of Pink Floyd gave a preview of his forthcoming solo album.

What attracts luminaries like West, Gilmour, Callow, legendary war photographer Don McCullin, Pretenders singer Chrissie Hynde, novelists Martin Amis and William Dalrymple from near and far to this discreet gathering of primarily journalists, novelists and thinkers, is the complete absence of pretension and intrusion. They sign books gracefully and mingle at ease with their readers.

Borris is exceptionally low key: the ambience of this small and beautiful Carlow village, encircled by the Blackstairs mountains, permeates a young festival whose readings take place in a ballroom, a former granary, a chapel, a marque and, for the first time, the village’s only hotel.

Borris also seems to bring out the best among its celebrated guests, of whom there were over 50 either reading or being interviewed: Don McCullin revealed to Mariella Frostrup that the soldier throwing the grenade and who was shot in his famous photograph of the Tet offensive, contacted him for the first time last week; Seamus Heaney’s response when Simon Callow requested him to read a poem at a memorial for the actor, Sir Paul Scofield, was “delira and excira”; Chrissie Hynde explained why guys prefer to work with women in the studio: “it’s one less male ego in the way.”; Bruce Robinson said the worst moment of his life was when his stepfather told his 13-year-old self that he was “just a loud mouthed little c***. ‘It shocked me to the marrow of my bone.’”

Booker prize winner John Banville, never short of a good quote when he turns up at Borris, opined “Life is incoherent, we don’t remember our births, we don’t experience our deaths and all we have is this mess in the middle.”

The performance of South London’s Kate Tempest was a first for the occasionally high brow Borris: Tempest has been a rapper since she was 15, and her performance of her poem Your Daddy Is A Soldier from heart resulted in the longest and loudest ovation of the three day event.

At the 5×15 session (five writers speaking for 15 mins each) Hyeonseo Lee gave a simple and heart-felt account of her decision to defect from North Korea and the challenges she faced along the way.