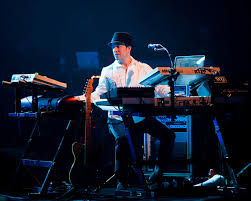 Held bursts into life with Pearl, and Rebello starts as he means to go, flooding the eleven mostly original tracks – there is an eclectic but sumptuous take of Paul McCartney’s Blackbird – with illumination and verve.

He can drop gear with equal dexterity, such as with Tokyo Dream, which is superlative playing from one of jazz’s most impressionistic pianists, whose playing, when it is delicate, is subcutaneous in its reach.

Throughout, Thanks John and Polzeath, for example, there is the interpretative insight of a meticulous musician whose  pianistic pedigree is deeply felt.

What segues Held, specifically from Thanks John to Dissolve, besides the brief tenure of the compositions, ranging from 2.02 to 1.55 or thereabouts in length, is Rebello’s recurring motifs of introspection and the same patchwork of emotional patterns.

In this sense Blackbird risked being a jolt, because the opening chords are so familiar, but one is always curious, especially after Brad Meldahu’s adaptations of Radiohead, to see how musicians put their own spin on something that is perfect to start out with.

Remarkably, Rebello melds the Beatles track into the continuum of Held’s intimate tone, and the colourful tapestry from Pearl to Dissolve is not once disjointed, a tribute to Rebello’s firmness of tone, which never succumbs to laden melancholy.

Rebello, better known for playing electronic keyboards with his own groups and with Sting and Jeff Beck, approached Held as an opportunity to immerse himself fully in the piano.

And so, consolidating all his musical experiences into a single instrument, with compositions inspired by people and places, Rebello unveils a chilled versatility in his playing, completely devoid of visceral stunts, and has produced a beautifully recorded experience.

New recordings come and go, but there is a hypnotic magic in Held’s reverie which captivates from beginning to end, with beguilingly seductive lines from Rebello.