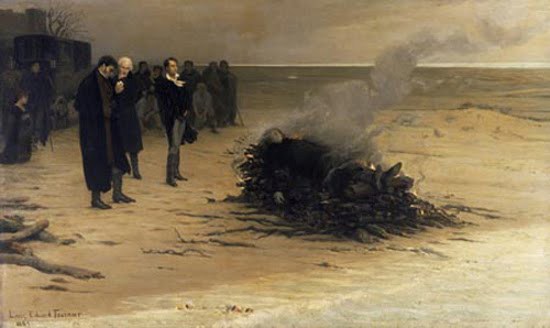 If, as Farley and Roberts suggest –  based on research by an American academic – that being a published poet is more dangerous than being a deep sea diver, then the premise of this book is self evident: not alone should poets be uninsurable, but their company should be avoided at all costs.

However, while each page bears the colophon of a death’s head, and Farley and Roberts risk being literary pall bearers for the well known tragic poets – John Berryman, Sylvia Plath, Anne Sexton – and the less well known – the murdered John Riley and the reclusive Rosemary Tonk, the successful poet today has never had it so good.

Grants, Nobel Prizes, bursaries, Presidencies have gradually removed poets from the paucity of the garret and from living hand to mouth: indeed the last infamous suicide in the highly enjoyable Deaths of the Poets – a clearly certifiable Berryman from a Minneapolis bridge – occurred when both authors were mere chaps and studying Wordsworth at school.

With the exception of the Great War poets, and the authors had any amount to choose from (Rupert Brooke, Francis Ledwidge are not included), their exhaustive research is less cemetery rambling and more digging through copious files and correspondence and visiting places immortalised less by the poet’s final words than by their deeds: Dylan Thomas’s alleged eighteen straight whiskeys at the White Horse Inn, or Anne Sexton’s death in her garage. Farley and Roberts should be commended for knowing the difference between snooping and enlightenment and when they feel they are trespassing (inspecting unpublished notes by Thom Gunn) they back off.

Though death is the big line break, the authors are not obsessed with the more often than not abrupt caesura which shuffles off the mortal coil whether a poet is in their stride (Plath and Thomas) or not, William Carlos Williams and Marianne Moore.

Both authors are award winning poets and – thankfully – it shows with lucid expositions about the individual behind the poet, such as a brilliant investigate foray into the last days of Keith Douglas, killed in Normandy a short time after the D Day landings, or Byron in Greece, for many the definitive iconic image of the tragic poet, although he certainly had a good time whilst becoming a legend.

Familiarity with contemporary poetry writing in English eases one’s passage through this most enjoyable tome, and even a nodding acquaintance with Cal Lowell and his contemporaries, including Berryman and Elizabeth Bishop, or, closer to home, Ted Hughes and Seamus Heaney, helps distil the purity from the precis-like quality of the analysis